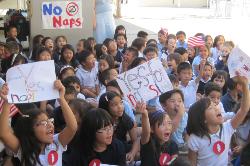 Mrs. Ng’s class divided themselves into two political parties represented by a chosen animal – Owls and Pigs. Each party was given a “platform” – the Pig Party was against naps in school, and the Owl Party was for naps in school. Making buttons, posters, nominating students to represent each party, formulating speeches, and practicing for the big event were part of the learning process.

On Election Day, two voting booths were set up outside of Mrs. Ng’s classroom, as well as an area marked for the convention.  A couple of students from Mrs. Lopez’s class led the attendees with a patriotic song. It was then followed by each party representative trying to persuade the attendees to vote for or against naps in schools. At the conclusion, each class lined up to cast their votes.  Mrs. Brennan and Mrs. Hanson required their students to bring their registration card in order to vote.

The 1st and 2nd graders were not the only ones excited about the convention and mock-election. Nearby classrooms of 4th graders, and 8th graders overlooking from the balcony above participated along in the chanting of their choice – Yes naps! No naps!

“Just like our country anticipating the results of the election, a buzz of excitement could be felt as the students stepped onto campus the next day. This is learning coming alive,”  Mrs. Ng said.

If you were wondering how the mock-election ended, should we have naps in school? The results were: Yes Naps – 51, No Naps - 66.