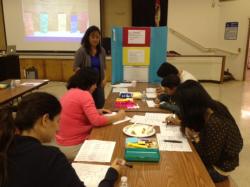 This school year, Brightwood School, is taking Parent Education on an academic road with Thinking Maps.  The purpose is to empower parents in their children’s education, to keep parents in the loop of assignments that children may bring home, and to further enable parents to be partners with the school and teachers.

During the 2011 – 2012 school year, Brightwood embraced Thinking Maps as a common language of instruction and learning for students in Grades K – 8.  The eight maps are linked directly to eight cognitive thought processes, making learning and studying more visual to students.  Brain research has strongly supported the value of visual representations, and coupled with linguistic representation, Thinking Maps makes learning more accessible to all students.

November 14 was the first evening of a two-part training for Brightwood parents that included volunteers from Brightwood PTA.  Presenters who are Thinking Maps trainers Mrs. Kimberly Lim, a 5th grade teacher, and Ms. Goh, the Assistant Principal, presented the rationale and benefits of Thinking Maps for students.  They gave an overview of each of the eight maps, concentrating on four maps that parents would be working on at the four stations.  At the end of the presentations, parents rotated to four stations, each facilitated by parent volunteers who were trained on an earlier date.  One could see that the parent volunteers had been practicing with the maps prior to that evening. The five parent volunteers Lee Hasegawa, Patricia Pluegboonyachai, Kimmie Matsuda, Jill Lee, and Christine Hum were thoroughly prepared to help each group of parents as they rotated to them.

The second part to this Thinking Maps series was on November 28, 2012.  Taking note that some parents may not be able to attend evening workshops, Principal Ms. Tambara has also repeated the Thinking Maps training for parents at 8:15 a.m. on December 4 and December 10, 2012.