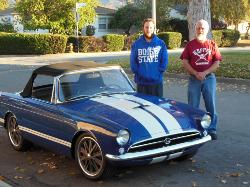 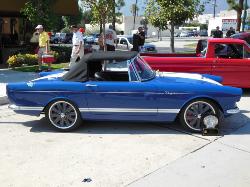 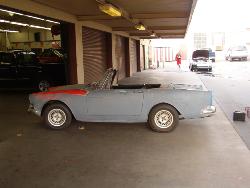 Thanking a teacher for his years of dedication, the Velocity Channel’s show Overhaulin’ surprised Mark Keppel auto technology teacher Jim Horton on a Friday afternoon and carted off his beloved 1965 Sunbeam Tiger for an extreme makeover.

The premise of the 60-minute program is to restore and modify cars of deserving and unsuspecting individuals. Chip Foose, renowned automotive designer and fabricator, leads a group experts, called the "A team,” in transforming a car from poor to show condition in just three weeks. Horton’s son Andrew nominated his father’s car, which was selected out of 55,000 submissions. Andrew and Horton’s wife Jan arranged for the show to surprise Mr. Horton at Keppel; Principal Jas Cisneros and Assistant Principal Khevin Devaughn make an appearance in the beginning of the program as “the deception” begins. Images of Mark Keppel High School are also featured.

“They surprised me at Mark Keppel High School, pretending that they wanted to film an automotive educational film using the MKHS Auto Shop,” Mr. Horton explained. “While the host of the show, Chris Jacobs, was talking to me about filming at MKHS, he asked if I had any cars that need to be restored, and I mentioned my Sunbeam. While we were talking, he pulled out a radio, and called in a tow truck. Suddenly I was surrounded by cameras and the film crew. They towed away my car, and Overhauled it,” Mr. Horton said. AUSD administrators Dr. Gary Gonzales and Brad Walsh were also in on “the deception” planning.

In the program, host Jacobs says to Mr. Horton, “You do so much for your community, for the students here at the high school, that this is our way giving something back.” Andrew Horton visits Mr. Foose in his studio and gives input on the design of the car, which will be modeled after a baby Shelby Cobra, classic dark blue with white stripes and a black interior.

Andrew Horton says to the camera, “My dad deserves to be overhauled because he puts so much time and effort into everything besides himself. It’s going to be nice for him to finally get something nice of his own. He’s going to be really surprised.”  And indeed, Mr. Horton, who has taught for 26 years and is also chair of Keppel’s Career Technical Education Department, was.

Mr. Horton got the Sunbeam when he was 18 years old and has owned the car for 32 years. “I drove my son Andrew to t-ball games in it. I’ve had the car longer than I’ve known my wife and my kids,” he says right before the transformed car is revealed.

As he opens his eyes, Mr. Horton takes a step back and is visibly moved by the car’s stunning new look.

“I love the transformation. It was a project that needed a lot of work, and I don't have much spare time, so it was very slow progress,” Mr. Horton said recently. “Now, we have a very nice, finished car that we can enjoy. We have driven about 400 miles, just to local cruises and car club events.”

As for the ride?  Mr. Horton says it feels like he’s driving a new car. “It has the new car smell, and everything you see while driving is brand new. The engine runs perfectly. By the way, the engine had been rebuilt for me by the San Gabriel High School auto shop teacher Tony Simonian. It was the last engine that he rebuilt before he passed away six years ago.”

Since the show, Mr. Horton and his wife Jan have been taking the car to events and spending more time together. He and Andrew have been recognized in public. And his students, proud to be a part of the MKHS Auto Shop, cheered several times when Mr. Horton showed them the episode.

“I still can't believe that it is true. It is like I won a lottery, but with getting my car fixed up as the prize,” Mr. Horton beamed.

The episode, which is titled “Jim’s 1965 Sunbeam Tiger,” (Season 8, episode 2) first aired on Nov. 4, on the Velocity channel and is available on Youtube: https://www.youtube.com/watch?v=DEpluWFmB6M