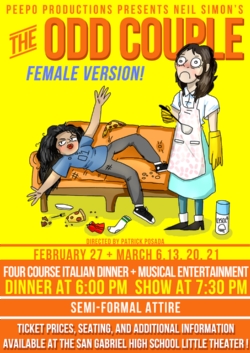 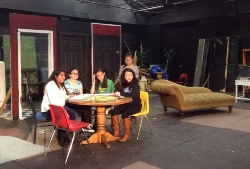 A humming crowd of hungry actors piled into San Gabriel High School’s Little Theatre on Jan. 8 eager to audition for the 2015 dinner theatre production. The play will be a female version of The Odd Couple centering around single, messy packrat Olive and her clean-freak friend Florence who move in together when Florence’s husband suddenly asks for a divorce. Now roommates, the two soon discover that living with each other’s issues may be impossible. This production features a cast of eight characters, six female and two male. Auditioners were issued a variety of scenes to act out on stage with each other, and for many this was the first audition they had ever attended.
“I’ve never been to an actual audition before,” sophomore Victor Ramirez said. For most, even returning actors, an audition can be frightening. “I was really nervous, but it was pretty fun because I was acting in front of my friends,” Ramirez said.
Apart from reading from the script, director Patrick Posada also set up improvisational scenes to create a sense of natural flow in the scene.
“We did an improv scene where a bunch of the girls were playing Trivial Pursuit together and it was super hilarious!” freshman veteran actor Brizeth Lomeli said. The improv scenes had actors perform without any sort of previous preparation and making up lines on the spot. “Our scene was wild, and I think it’s good for the comedy [aspect] of the show,” Lomeli, who was cast as Olive Unger, said.
Being a much-anticipated event by students and staff, San Gabriel High’s annual dinner theatre brings tasty catered Italian cuisine and live theater performance together for quite an experience. The Little Theatre is transformed by drama club members and tech classes into a lavish restaurant, complete with themed music, table decoration, and hospitable student waiters for a memorable night of art and culture. The Odd Couple is set to open on Feb. 27 at 6 p.m. and will play Fridays on March 6, 13, 20 and one Saturday on March 21. Tickets are $30. For information email Posada_Patrick@ausd.us.
This article was written by Emmanuel Maresca, junior, Multimedia Editor, The Matador, San Gabriel High School.
Photo caption: San Gabriel students (l-r) Carolina Garcia, Brizeth Lomeli, Alina Hurtado, Chelsey Tran, and Uyen Sy rehearse for the female version of The Odd Couple, the spring dinner theatre production at San Gabriel High School.
(Posted 2/2015)