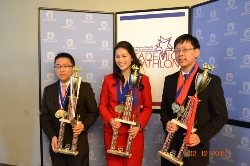 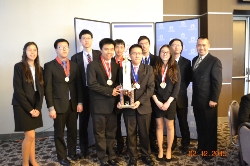 In this year’s regional Los Angeles County Academic Decathlon competition, Mark Keppel High School had a solid performance, finishing second with a score of 50,419.5 out of a possible 65,400 points. The winning team this year was South Pasadena High School, with a total of 54,897.5. Alhambra High School placed ninth, coming in at 43,960.2. All three teams, along with six others, will advance to the state round, which will be held March 19 to 22 in Sacramento. This year’s theme is Alternative Energy.

Although Keppel finished second, the team improved significantly in score compared to last season. Coached by Social Science teacher Tin Tran, the team was able to increase its score by over 3,600 points compared to the previous year. The team could not succeed, however, without the tremendous support from Principal Jacinth Cisneros and district personnel, to whom it is ineffably grateful. The team consists of the following: seniors Chaney Tse, Annette Cai, Eric Lin, Jason Chang, Jeffery Wong; juniors Justin Ho, Patrick Chea, Jimmy Chong; and sophomore Jocelyn Shackleford. Overall, the team garnered 31 individual medals. In particular, Chaney Tse, team captain and president, earned the honor of third highest scorer out of all decathletes at competition, and Patrick Chea earned the honor of second highest scorer in the scholastic category. Patrick's second-place finish also meant that he received the Jeff Jones Memorial Scholarship worth $125.