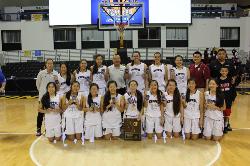 Undefeated in the Almont league and the number one seed in the Southern California Regional tournament, Mark Keppel has always been known for its stellar basketball program and a formidable lineup. Seniors Lauren Saiki and Kylie Fujioka signed to West Virginia University and CSU Monterey Bay respectively on April 15 to continue their basketball careers. Junior Sophia Song was named the Pasadena Star-News player of the year, while senior Kelli Kamida holds the state record for most three pointers in a single game at 17 three pointers. Mark Keppel had their greatest opportunity to show off their talent during their first appearance at the Southern California Regional final, which was broadcasted live on March 21 on the TWC Sportsnet Channel.  After an intense game, Keppel took home the victory against Redondo Union, 48-44.

Despite a loss to Archbishop Mitty at the state final, the team still takes away much experience from this journey. "Staying focused and together as a team was crucial," junior Sophia Song said. "Not a lot of teams get to the end the way we did, and go all the way to the state championship so that experience was awesome."