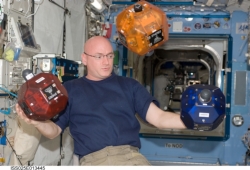 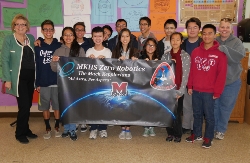 The Zero Robotics team at Mark Keppel High School, a group comprised of freshmen and sophomores, pulled off a suspenseful victory in outer space and became the Virtual Champions of a high school robotics competition sponsored by NASA and the Massachusetts Institute of Technology (MIT). On Jan. 16, the teammates along with their Keppel classmates, Principal Jas Cisneros, and adviser Ellen Hake, watched the final match, which was streamed live from the International Space Station (ISS) and given play-by-play commentary by astronauts who currently live and work in zero gravity aboard the station.

The Zero Robotics competition requires high school students to write software code for SPHERES, which stands for Synchronized Position Hold Engage and Reorient Experimental Satellites. The challenge was to program the SPHERES, which are the size of bowling bowl, to take pictures of points of interest on a simulated asteroid, and then point to Earth and upload the photo. Points are awarded per task completed. Keppel’s match can be viewed here: http://zerorobotics.mit.edu/ (click on the Webcast link and scroll forward to 4 hours 44 minutes) and shows the SPHERES maneuvering and floating inside the ISS with three astronauts cheering them on.

“The match was suspenseful to the end, with our scores nearly tied,” Douglas Chin, team president and founder, said. “At first, we were crushed as we watched the other SPHERES lead by 0.05 points. Near the very end of the match, when the commentator announced that our SPHERES had pulled ahead by 0.1 points, we were elated. We waited several more seconds for the results to be tallied. After it was announced that we were the Virtual Champions, the room exploded with cheers and applause.”

The teams’ strategy to win was to prepare for all possible scenarios. “After building a solid base strategy to work with, we further enhanced our code by adding in contingency plans for worst case scenarios - for example, running out of allocated fuel, which led to our victory,” explained Douglas.

The team known as The Mach Kepplerians spent approximately 180 hours coding for the competition, which proceeded in rounds and brackets, similar to football playoffs, and had started in September. They learned how to code from tutorials provided by NASA and MIT and through their own initiative, with many of the students having little to no programming experience beforehand. The early rounds took place in simulated environments, with the goal to advance to the live finals on the space station.

The Mach Kepplerians competed as a three-team alliance with teams from Mesa, AZ, USA and Fossano, Italy. During the competition, their combined team name was "KeppleriansWestwoodROBOVALL" and their final match was against the “AGNELLITRONICS” from Torino, Italy. Learning how to collaborate and work with different teams is one of the competition’s goals, as is giving students unprecedented access to space technology and showing young minds the concept of working in space as "normal.” During the draft portion of the competition where alliances were formed after team rankings, the Keppel team, who were the 14th team to start an alliance, decided that instead of picking the highest-ranking team, they would pick a “nice, friendly team” because Keppel wanted a “team player.” That strategy proved to be fruitful and the alliance met weekly via the Internet to talk strategy, run simulations, and refine what was seen during simulations.

The Alhambra Unified School District congratulates The Mach Kepplerians on their stellar achievement. The Monterey Park City Council celebrated the team on Jan. 20.

“I am very proud of our Zero Robotics team,” Principal Jas Cisneros said. “Winning the competition says a great deal about the students dedication, commitment, and drive to succeed. The entire Keppel community is honored by their accomplishments.”

Pictured are the SPHERES satellites used in the Zero Robotics competition.