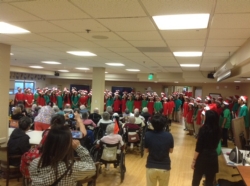 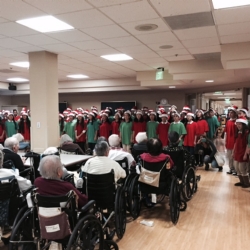 On Dec. 2, 2014, the rain was pouring and the weather was very cold. Regardless of this, Brightwood School eighth graders crowded into the Keiro Nursing Home to bring Christmas joy to the residents. For weeks, the students had practiced traditional Christmas songs like “Jingle Bells,” “Winter Wonderland,” and “Silent Night” and learned a Japanese dance called “Tanko Bushi” and the 1970s favorite, “The Hustle,” in preparation for this special day.

In addition to the performances, the eighth graders prepared origami to decorate the nursing home.  They folded origami cubes and triangular prisms, or “jewels,” to hang as ornaments on the nursing home’s Christmas tree. They also learned to make cranes to attach to paper wreaths to hang above the doors.  All these decorations livened up the nursing home and made it a more colorful place.

This was a very special experience for the eighth graders since it was their first time doing community service at a place like a nursing home.  Brightwood’s eighth grade teachers wanted their students have the opportunity to give back to people in the community.  Their ultimate goal was to let students experience the joy of not only doing things for themselves, but for other people as well.  In the end, this field trip to the Keiro Nursing Home not only touched the residents’ hearts, but also the hearts of the young teenagers who visited them.

This article was written by Brightwood eighth grader Charlene Pok.