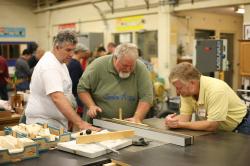 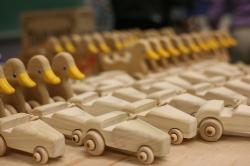 Woodworking Teacher John Mason’s wood shop at San Gabriel High School turned into Santa’s workshop for one night on November 29.  Over 460 wooden toys such as rolling ducks, locomotive engines, and thumb-wrestling games were hand made by over 60 volunteers for donation to non-profit organizations. Mason, a member of Epsilon Pi Tau, an International Honorary whose members are educators and industrial and technology educational professionals in the field of career technology education, hosted the Alpha Field Chapter of the organization for its annual project service night.

To complete 460 pieces in one night, the toy parts were cut out by the hand before the night during several work parties.  “We call ourselves the three amigos, SGHS, AHS, MKHS wood shop teachers. The three of us and Brad Walsh worked until late after school on the project we donated.  We cut, sanded and made jigs for ease of multiple processes. Some of my students helped do some drilling and sanding of parts,” Mason said.

“Because our chapter fully believes in the development of young minds for the future, members have been meeting together every year, for the past 45 years, to manufacture toys to donate to children during the holiday season,” said Gene Lew, Project Service Coordinator for Epsilon Pi Tau-Alpha Field Chapter.