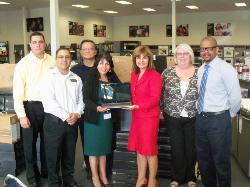 Howard’s Appliance and Flat Screen Superstore in Alhambra donated 48 laptops to the Alhambra Unified School District and 48 to the YMCA of West San Gabriel Valley on October 26.  The laptops, Sony or HP brand, are valued at $500 to $1000 each, making the donation worth approximately $72,000.

AUSD Director of Technology and Information Services Ashton Potter said Howard’s generous donation will help ready schools for the Common Core State Standards (CCSS). “As we move into the new standards, we recognize that students will need up-to-date computers for testing in 2014-15, and more importantly, we know they and their teachers need equipment for teaching and learning before that,” he said. “These computers will be added to our inventory, probably as an additional laptop cart, and issued to a site as part of our deployment plan to make sure that we are ready to surmount the challenge of fully implementing CCSS from a technology perspective.”

Supt. Laura Tellez said in the Pasadena Star News that donation is greatly appreciated. “We are so thrilled and very grateful,” Tellez told the newspaper. “Laptops are much easier to move from classroom to classroom. Stand-alone computers can only be in one room, but these can move around, so more students can benefit from them,” she said.

The laptops, which are one to two years old, were part of Howard’s unsold inventory. Mike Sanchez, general manager of the Alhambra Howard’s, told the Pasadena Star News that it made sense to make the donation because the business would have taken about a 50% loss. “We’d rather put them to good use,” he said and help the community. Alhambra is the location of Howard’s newest store, which opened in November of 2011 near Fresh and Easy on Main Street.