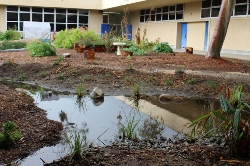 Next to the A-Building, a quiet spot of peace and serenity can be found: a new rain garden, created by the students at San Gabriel High School.

“We got a lot of compliments about [it],” Nguyen said. “I feel like we did a good job of building it and helping each other. I didn’t expect [the garden] to come out like that, but once I saw the rain coming and the water building up, [I think] it looked really pretty.”

A large amount of effort went into making the new rain garden possible. On one Saturday, the Environmental Club joined BTA members and loosened dirt, spread mulch, and dug holes for new plants in order to create a place of beauty on campus. Senior Janette Nguyen thought the garden she helped create “looked awesome.”

“I like how [the garden works] exactly as we envisioned it,” Nguyen said. “We made the middle part [of the garden] deeper than the rest, so all the rain would go there. And it did.”

Rainwater collected into a large puddle due to the heavy showers in December. Assistant Principal of Student Services Jocelyn Castro noticed the garden during the showers and thought “it was so beautiful.”

“[It was] a serene place on campus,” Ms. Castro said. “I appreciated the strategic trenches that take advantage of the run-off. Great job to [the BTA teachers] and students!”

The rain garden was funded by a grant received from the Upper San Gabriel Valley Municipal Water District. Jesse Chang, Kingdom Causes catalyst, helped coordinate the planning behind the rain garden and directed students on how to plant the garden. Mr. Chang was hoping to create “a native plant demonstration garden to help beautify, inspire, and educate others on how to [conserve water] and use native plants.” A good rain garden should drain in 24 hours or less.

“We hope a garden like this can inspire others to ‘go native’ and realize [it is] a better option that also encourages more biodiversity,” Mr. Chang said. “[Or] at the very least, give [students] something naturally beautiful to walk by every day.”

Additionally, the garden was planted directly next to the A-Building to take advantage of the water runoff.

“The goal is twofold: maximize the rainfall we have and [for the rocks to] act [like] a biofilter to remove contaminants before they run off into our storm drains,” Mr. Chang said. “During warm weather, one of the drains actually puts out a lot of water from all the AC units running to cool our classrooms, so it was an ideal place to put a rain garden.”

BTA teacher Joan Lee appreciates the teamwork that went into the garden: “It’s nice to see a lot of kids caring and putting effort into the garden....It’s a group effort to make the school look nice.”