Board of Education Member District 4 since 2002

Over the course of his nearly two decades on the Board, Bob has been instrumental in winning a total of $389 million in voter approved AUSD construction bonds to modernize the District’s 13 elementary schools, three high schools, and one continuation school. In addition to these successful funding efforts, Bob has a long history of supporting quality academic programs for every AUSD student. Bob has advocated for legislation to benefit not only AUSD students, but all California students and schools, including Students with Disabilities, Parent Engagement, Equity in Education, Ethnic Studies, and Social Emotional Learning.

A longtime community leader, Bob has served for the past five years as President of the Monterey Park Library Foundation to raise funds to support the Monterey Park Bruggemeyer Library. He has also acted as Co-Laity Chair to oversee projects for the Mission Area Team of the East District of the United Methodist Church. Bob is District Chair for the El Camino Real District, Greater Los Angeles Area Council of Boy Scouts of America, and a liaison to the Alhambra Educational Foundation.

A member of the Board of Directors of the California School Board Association (CSBA) for six years, Bob was also Director-at-Large for Asian Pacific Islanders from 2014 to 2018 and a member of the Delegate Assembly of CSBA.  He served on a number of CSBA committees, including the Governance Advisory Group, Equity Network Advisory Board, and the Planning Committee for the Annual Educational Conference. He also served on CSBA Legislative Committee, Bylaws Committee, Problematic Advisory Group, and the Council President Committee.

In his work for non-profit organizations, Bob was past Chair of the Lotus Festival in Los Angeles, past Chair for the Chinese New Year Parade in Los Angeles, National Vice President of Education for the Chinese American Citizens Alliance (CACA), and past President of the Greater San Gabriel Valley Lodge of CACA.  He currently serves as the Administrative Chair and Lay Speaker for Shepherd of the Hills, United Methodist Church.

A retired businessman, Bob has been a City of Monterey Park resident for the last 62 years. He and Diane, his wife of 45 years, have four daughters and five grandchildren. Now retired, Diane was an educator for the Los Angeles Unified School District with 40 years of teaching experience.

Bob was re-elected in November 2018 to serve another four-year term on the Board of Education representing District 4. 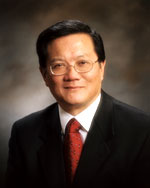